What Does “Reality” Mean: A Look at VR, AR, and MR

Have you ever wanted to go skydiving in the middle of your living room?  How about exploring the Grand Canyon from your bedroom?  A little while back, this was not possible. The introduction of virtual, augmented, and mixed realities not only make these experiences possible but are now easily accessible through numerous apps on different mobile platforms.

Virtual reality comes in many different forms.  In the past, most virtual entertainment systems were connected to a personal computer, which in turn connected to a head-mounted display(HMD). However, companies like Ecocarrier have published VR/AR apps that only require a smartphone device to use. HMDs are also more accessible. Google Cardboard is one of the cheapest headsets on the market and can be ordered from multiple channels.

We now see VR implemented in a variety of industries. For example, MindMotionPro is a medical VR app that helps patients recovering from strokes regain their stability and motion. The Samsung Gear VR has a number of entertainment apps that allow you to experience concerts and other entertaining events through virtual reality. Fox Sports also has a VR App which allows users to watch live sporting events in VR. Iris is a VR app that assists all facets of construction, including architecture, engineering, and design.  Bravemind’s VR technology is being used by the military to aid veterans who suffer from PTSD (Post Traumatic Stress Disorder). 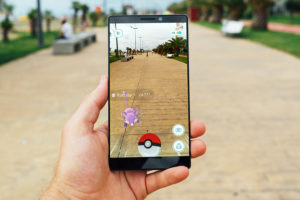 Augmented reality, has also made immense progress recently.  AR can be arguably more useful and have a larger market than virtual reality. AR includes the reality of your surroundings,  complemented by digital overlays. A popular example of AR is the mobile game, Pokémon Go. Players walk around, and the AR capabilities of the app reveal specific Pokémon. The app also features a map of the immediate surroundings, and pinpoint the exact location of a specific Pokémon. Using the player’s surroundings, Pokémon Go becomes an interactive game.  AR provides users with information without having to use their hands or alternate devices. Businesses, corporations, academic institutions are also using AR in their processes.  For example, W5GO is an AR learning app for children which makes lessons more interesting and interactive for children.

This piece of tech

nology garners a lot attention.  Mixed reality is pretty much what it sounds like: a mix of VR and AR.  Mixed reality allows users to view actual reality, just like augmented reality does.  Users can also view digital graphics overlaying actual reality on their headsets.  However, the difference between MR and AR is that when you encounter a digital object, it appears a lot more realistic because it reacts to your movements.  For example, if you see a digital object on a real table and lean in to get a closer look, this digital object will actually appear closer to you.

Although virtual reality has been around for a while, it has just recently become a part of everyday life. This was apparent at this years SXSW Interactive Trade Show, as there were many booths that hosted VR, AR, or MR technologies including NASA, Killer Infographics, Baofeng Mojing, and Ecocarrier. NASA is currently using an MR space station to train their astronauts. This MR app works with a robotic crane to give astronauts the feeling of gravity similar to that of Mars or the moon.  Baofeng Mojing is the world’s first company that mass produces personal VR equipment such as headsets and helmets.

The realm of technology has transformed through apps that are VR, MR, and AR-enabled.  Soon, our everyday lives may depend on these technologies.