A couple of days ago, pictures of the highly-anticipated iPhone 8 were leaked on twitter by Steve Hemmerstoffer aka @OnLeaks. These pictures may or may not be accurate of what the actual phone may look like, which is set to come out in September 2017. The pictures of the dummy iPhone 8 are posted below: 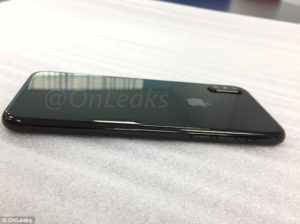 Nobody knows whether the actual phone will look like this, but many speculate that this is an accurate depiction of the device. If this is a true dummy iPhone 8, then it looks like the phone will see a shape change. The new shape will be similar to that of the Samsung Galaxy S8 and S8 Plus. There are also rumors that the iPhone 8 will have the following features: greater resistance to water and water damage, a stainless steel body, support for the Apple pencil and magnetic charging, similar to the Apple Watch. Also, just like the new Samsung Galaxy, the touch ID sensor will be on the back of the phone rather than on the home button. Speaking of the home button, you could expect that to be gone as the phone will be designed to optimize as much screen room as possible. As we can see, the camera will shift its look as well. It will be vertically placed and will extend and pop out a bit, which could affect how well the phone sits on flat surfaces. According to the leaked photos, there will be two cameras on the back of the phone.

However, at the end of the day, these are just rumors. We won’t officially know how the phone is going to look until Apple themselves release a statement. But for now, it is fun to daydream and envision how the 10th-edition iPhone just might look.

What features would you like to see the iPhone 8 have? Let us know in the comments section below!