Snapchat Introduces Latest Update: You Can Now Insert Links in Your Snaps!

It’s only been a couple of weeks since Snapchat introduced its ‘Snap Map’ feature. (Read our blog about that right here). However, the social media platform is not done making changes. Just today, the app added a few new features, the biggest being the ability to now add links to snaps.

Snapchat has officially introduced these three new features via the app’s update. The first feature we will discuss is Backdrops. Backdrop lets you select areas in your picture that will not be affected by the feature. Once you select those “untouchable” areas, the rest of the areas can be decorated with different designs such as the one shown below. This will elevate your snap game and will make sure you have the artsiest snaps in your friend group. 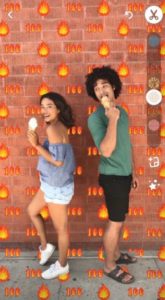 The next feature that Snapchat has introduced is Voice Filters. We have seen this to a certain extent with some of the facial filters that Snapchat has had in the past. However, these new voice filters will be customizable, being able to alter your voice’s pitch in multiple ways. Snap stories will definitely become more interesting with this new update. Just imagine a story with five different-sounding voices! Hilarious much? This is yet another feature that differentiates Snapchat from Instagram. Who knows, maybe Instagram will come out with voice filters next week. That is how these things work right?

The last, and in my opinion most substantial feature that Snapchat has introduced is the ability to add links to snaps. This feature is known as Paperclips, something that was once only capable for advertisers when they paid to promote their products and/or services. This is huge for individuals trying to promote themselves on Snapchat. I know for a fact many YouTubers will be ecstatic to know that they can directly post a link to their newest video in their snap stories. This is also a great tool that organizations can use to promote events.

What do you guys think is the most significant feature that Snapchat has included in its recent update? Let us know in the comments section!