It’s one of our favorite times of year… for marketing purposes that is: Valentine’s Day and Hallmark’s Genius. Of course, it’s about love and loved ones. Some will be showered with chocolates and flowers. On the other hand, some maybe resentful and moping on the couch with Ben & Jerry’s and Netflix. No matter what team you play for as far as Valentine’s Day, Hallmark has a card for that.  Can we just give Hallmark a round of applause for their marketing team? 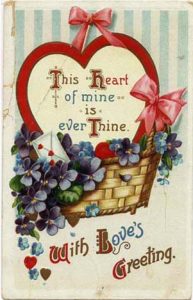 First of all, Valentine’s Day didn’t quite get the romantic kick off that we all know today. In fact, the St. Valentine was known for performing forbidden marriage ceremonies and ministering to Christians during the Roman Empire, which was a “no-no” at the time.  Eventually, he was executed and February 14th became a day of feast in his honor.  Later in the 1300’s, Chaucer, the English poet, put a lighter spin on St. Valentine’s Day thus the beginning of what we know today.

Hallmark wasn’t always Hallmark as we know it.  Originally the Norfolk Post Card Company, Hallmark has transformed over the last century from their original postcard prints to launching modern-day wrapping paper, greeting cards, and now there is a whole Hallmark Channel.

Their humble beginning in Kansas City, Missouri has grown to what is now international success. Their first ad was placed in Ladies’ Home Journal in 1928. They began branding every greeting card with their logo and have acquired many businesses along the way as well.

In conclusion, Hallmark is the perfect example of starting small, finding the niche, and continuing with consistent branding.  As the business grew, they morphed and changed with the times. They were and, still, are efficient in their message.  Moreover, now, they sell the most amount of cards on Valentine’s Day out of any other holiday of the year!